We do not intend to make the computer itself our instrument, but rather use the computer to develop instruments with. That is because we are essentially instrumentalists looking for extra possibilities. The extensions of our acoustic instruments need to have direct control, similar to a hands-on (or feet-on) control of stompbox effects. For example, we don’t want to navigate between menus with a mouse on a computer screen before anything can happen. Therefore we use different kinds of midi-controllers to justify our setup ergonomically and make it overall usable. In general we think good controllability is a result of good functionality, well-considered routing and personalized midi control.

The instrument is a puzzle

This is the part where things come together. Like a pedal board, it can never really be complete because you have to make compromises. As discussed earlier we found/developed a collection of hardware and software elements that we like, but in the end we want all of this to feel like an extension of our own acoustic instruments. For these tools to feel intuitive and playable, a good interface is required. The interface can be an Ableton Push controller or a combination of midi-controllers and pedals, as long as it creates a meaningful relationship between the player and the instrument. This makes it very dependent on what instrument you play and how you like to play it. Because of the fact that a guitarist mostly needs both hands for playing, it is likely that he wants as much control on the floor as possible. However in some cases it is just more practical to have a midi-controller with mixer lay-out on a table, compared to having a series of expression pedals on the floor.

In the section about computer processing we already discussed the criteria to evaluate our tools. It speaks for itself that controllability of a device is something that has to be auditioned extensively in live contexts.

This is an example of a test ride with a two-track prototype sampler (january 2019) to evaluate its functionality – not everything functioned as intended – and controllability: most of the sampling is done with a Roland foot controller (buttons and expression pedals) in combination with a Novation Launch Control and an iRig keyboard. These kind of sessions were inevitable to be able to fine-tune our setups. 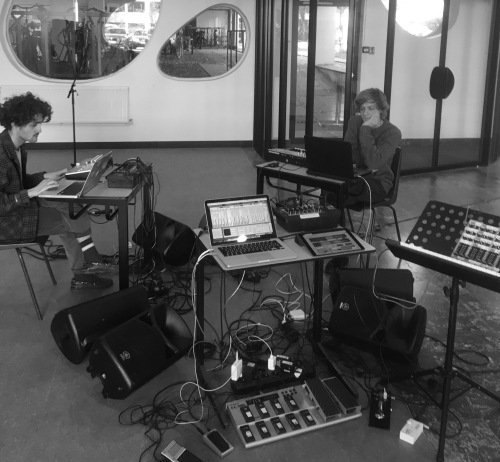 As any instrumentalist aims to master his instrument deeply, we decided at some point to limit ourselves to our augmented setups only, leaving out our acoustic instruments. By only processing the input of three different condenser mics, we tried to interact with the surroundings (a hall with passing people).  Subtle juxtapositions of new-made field recordings  as well as more extreme processing (giving rise to very digital interventions) were explored during these sessions.

Assigning the right midi control to your preferred tools is a crucial part of our extended instrument development. On/off switches or momentary engagement switches probably need buttons (most midi controllers allow you to choose whether they act like toggle or momentary switches). Faders and knobs intrinsically do the same, but they feel different. Faders are mostly used for volume purposes, but just as well as a dry/wet switch for instance. Knobs are commonly used for tuning extra parameters and they occupy little space compared to sliders.

The app lemur was extensively tested during the first period of the project. It works via a closed network that connects the iPad to your computer. Especially their Multiball interface (xy-pad) and their gravity modes to emulate physics (which can make your controller bounce, rebound and oscillate) were found interesting. The particular feature that was missing was to display sound files, in which you can select fragments with your fingers. Miraweb is a functionality within Max/MSP that works via an internet connection. It controls Max wirelessly and you shape it the way you want, directly in the Max patch. With this one it is possible to make the samples visible and select parts by touch. There are other apps on the market, but they all share the same idea: the ability to accommodate everything you need and more. The benefits are that you have new kinds of direct control, directly in contact with a display. Although the tablet is 100% customizable, the touchscreen can lack a certain realness and physicality that we tend to like. For some reason, turning a knob or sliding a fader has more satisfactory results than to control them by swiping a touchscreen. The preferred physicality is probably a remainder of the old school analog days, where you had to turn real knobs to set a compressor. This nostalgia can be found in all kinds of software, plug-ins and midi-controllers.

Numerous new systems are emerging that are both customizable and physical, like Mine S, YAELTEX and Palette Gear Modular Control. We think that these tools will gain attention and will become more accessible and affordable over the years. 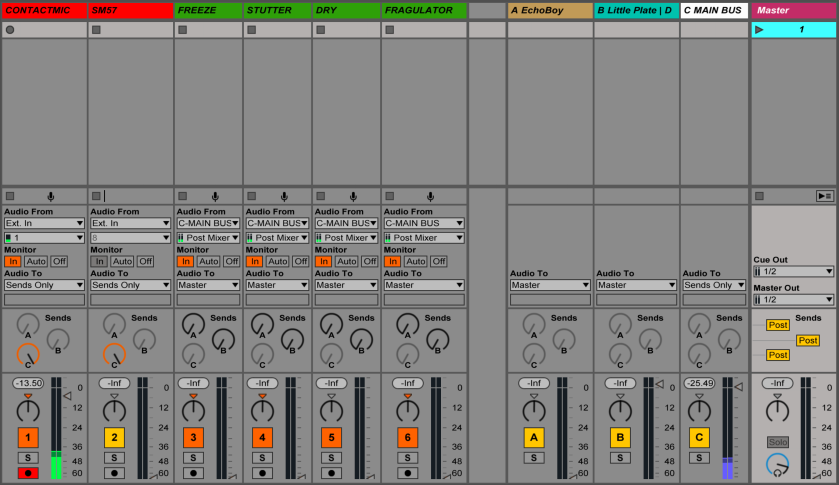 Vitja’s setup consists of some (changeable) effect pedals, a midi foot controller for sampling, a midi controller (with buttons, faders and knobs), an extra midi keyboard and an occasional iPad.

Casper’s setup consists of numerous objects and bells, a midi controller (having buttons, faders and knobs) and a reversed speaker.

Often when improvising with the setup, too much control over too much parameters seemed to block the intuition. Therefore, in this Ableton setup there are several LFO’s integrated which you can set to ‘random’. This means the effects will have a surprising outcome, and you can interact with them instead of controlling them. For choosing what effect to put on the drums, the BopPad is an instrument that is well integrated in the movements you are used to as a drummer; subtile finger control as well as hard stick playing is possible.